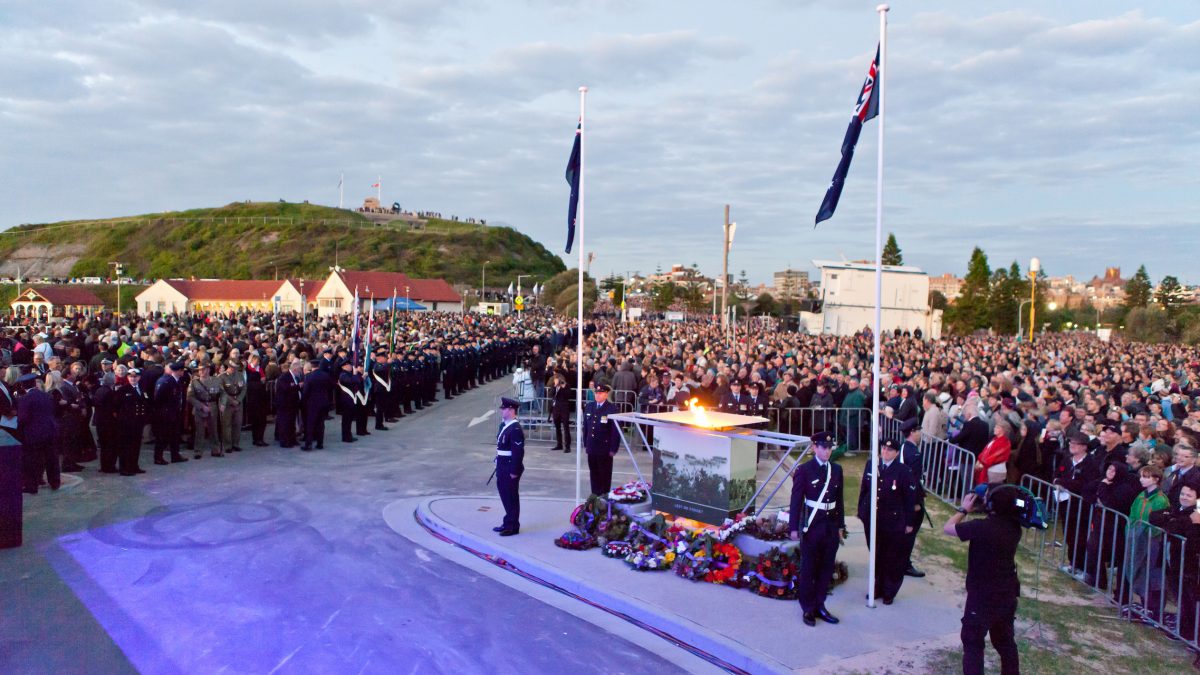 ‘We’re televised into Northern NSW and we’re also streamed online, so we go all around the world,’ he says.

But it hasn’t always been that way. In 1999 the average attendance at the city’s ANZAC Day Dawn Service, which was then held in Civic Park, was around just 600 people.

Describing the growth of the service Mr Fayle says, ‘In 2000 we decided we’d do something different and move it up to Nobbys. We got around 1,600 people. Then we got 5,000 to 6,000 people and we didn’t have an adequate sound system, so we hired gear. Now, thanks to our financial supporters we’re using some of the best audio visual equipment around.’

The Dawn Service, which begins at 5am involves a band, choir, bugler and bagpiper. The service closes with a four-gun Salute to the Fallen from Fort Scratchley.

‘What we’re doing is big. It’s for the community. We’re giving as many people as possible the chance to reflect and commemorate. But we also want the younger generation to understand that democracy isn’t something they can take for granted. For us to live the lifestyle we’ve got and the freedoms we’ve got, thousands of men and women died to ensure that. And in Newcastle, you don’t have to scratch the surface too hard to realise that just about everybody is related to somebody who has been to war.

‘We also react to the community’s requests for what it wants. We were one of the first services to include the Ataturk Poem, which is read by a member of the local Turkish community. We have the Flanders Field Poem and read the reply that was written a few years after that. About three or four years ago we got a chap from the Maori community to read a parallel to the Ode in the Maori language. The feedback we got on that was unbelievable.’

That Dawn Services exist is something most of us take for granted, but they don’t come cheap, especially the one at Nobby’s Beach.

‘It costs us around $55,000 to $60,000 and we couldn’t do it without the help of our supporters.,’ says Mr Fayle. ‘Port Waratah is the oldest supporter of the Dawn Service. When they came on board, it gave us the ability and the legitimacy to go to other supporters and say, “look an organization like that think it’s worth supporting us, will you do the same?”. It’s the strength of them saying yes that means a lot.’

Newcastle ANZAC Day Dawn Service at Nobby’s Beach is the second largest Dawn Service in Australia outside Canberra. It hosts around 55,000 people and is broadcast into Northern NSW and is live-streamed to reach international audiences.